Great Stand on the Ugra River

The Ugra River (1480)
Background: During the spring of 1480, the citizens of Grand Duchy of Moscow decided to pay tribute any longer to the Horde/Tartars. After hearing word of this, the Khan of the Great Horde Akhmat directed his troops toward Moscow to seek the tribute or war. When the Mongols arrived at the Ugra River the passages and fords had been blocked by the armies of the Grand Duchy of Moscow causing Fighting to ensue over the fords for several days. Each time the Mongols would attack they be easily repelled by the armies of the Muscovy. Instead of continuing to attack Akhmat decided to wait causing the Great Stand on the Ugra River to occur.

Purpose of the Battle: The Khan after finding the Muscovite people were not going to give him tribute decided to use force. The Khan before deciding to use force sent diplomats to the Muscovy people. This attempt to peacefully resolve the tribute issue failed, so the Khan sent in his armies.

The Battle: The Standoff at the Ugra River was not an actual battle however, instead is was stare down contest that lasted many months. Akhmat could not find a passage through the river and decided to wait on reinforcements from the Polish-Lithuanian King Kazimir IV. During the time of stalemate negotiations and skirmishes occurred but no side could find an edge. As time passed the Khan had no word from his Polish-Lithuanian allies and found himself being surrounded by the Muscovy soldiers that walked many months around the river to flank the Khan's army. With the Khan being surrounded, the Khan decided to retreat before he was outmaneuvered by the Muscovite troops. After retreating back to the Golden Horde he was told of an imposing attack from the Crimean Khan or the Nogais. Months after the Great Stand on the Ugra River, Khan Akhmat was killed in a battle against the Nogais, which in turn freed the Muscovites fully from the Golden Horde.


The Muscovy turning down the Horde diplomats 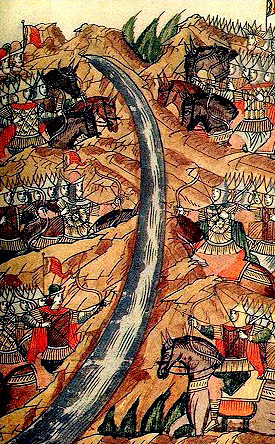 The Great Stand on the Ugra River

Aftermath:  With the Muscovy holding there ground at the Ugra River they showed to all nations in the the North that they were a force that was not intimidated by anyone. This stand also marked the final downfall of the Tatar yoke. In the end the Muscovite people became an independent and sovereign nation.